An Actress, Mathematician and Inventor and Wi-Fi 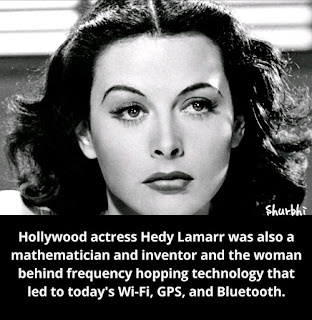 Hedy Lamarr was a Hollywood actress, mathematician, inventor woman behind the Frequency hopping technology that led to today's wi-fi, GPS and Bluetooth!
Posted by Shurbhi.in at 03:54 No comments:

Difference between Rich and Poor

Elon Musk explains why his daughter can't marry a poor man.
A few years ago there was a conference in the United States on investment and finance. One of the speakers was Elon Musk and during the question and answer session, he was asked a question that had everyone laughing.
If he, the richest man in the world, could accept that his daughter marry a poor or modest man?
His answer can change something in everyone:
Elon Musk - "First of all, understand that
Wealth does not mean having a fat bank account. Wealth is primarily the ability to create wealth.
Example: Someone who wins the lottery or gambling. Even if he wins 100 millions is not a rich man: He is a poor man with a lot of money.  That's the reason why 90% of the lottery millionaires become poor again after 5 years.
You also have rich people who have no money.
Example: Most entrepreneurs. THEY are already on the road to wealth even though they have no money, because they are developing their financial intelligence and that is wealth.
How are the rich and the poor different?
To put it simply: The rich may die to become rich, while the poor may kill to become rich.
If you see a young person who decides to train, to learn new things, who tries to improve himself constantly, know that he is a rich man.
If you see a young person who thinks that the problem is the state, and who thinks that the rich are all thieves and who criticizes constantly, know that he is a poor man.
The rich are convinced that they just need information and training to take off, the poor think that others must give them money to take off.
In conclusion, when I say that my daughter will not marry a poor man, I am not talking about money. I'm talking about the ability to create wealth in that man.
Excuse me for saying this, but most criminals are poor people. When they are in front of money, they lose their mind, that's why they rob, steal etc... For them it is a grace because they don't know how they could earn money by themselves.
One day, the guard of a bank found a bag full of money, he took the bag and went to give it to the bank manager.
People called this man an idiot, but in reality this man was just a rich man who had no money.
One year later, the bank offered him a job as a receptionist, 3 years later he was a customer manager and 10 years later he manages the regional management of this bank, he manages hundreds of employees and his annual bonus exceeds the amount he could have stolen."
Wealth is first of all a state of mind.
So … are you rich or poor?
✔️🎯
Posted by Shurbhi.in at 12:25 No comments:

Besides India, Diwali is celebrated in many countries like, Mauritius, Nepal, Sri Lanka, Malaysia, Myanmar, Singapore, etc.
Posted by Shurbhi.in at 14:33 No comments:

Real Fasting of Navaratri in the intellectual level means purification of the soul in the following ways
*Prathama* - 🌚
I will leave all my Anger
*Dwitiya* - 🧡
I will stop Judging People.
*Tritiya* - 🤍
I will leave all my  Grudges.
*Chaturthi* - ❤️
I will forgive myself & everyone
*Panchami* - 💙
I will Accept myself &  every one AS they are
*Shashti* - 💛
I will love myself & everyone unconditionally
*Saptami* - 💚
I will leave all my feelings of Jealousy & Guilt
*Ashtami (durgaashtami)* - 🦚
I will leave all my Fears
*Navami (mahanavami)* - 💜
I will offer Gratitude for all the things I have and all which I will get.
*Dashami (vijayadashami)* -
There is abundance in the universe for all and I will always tap the same and  create what I want through unconditional love, Sadhana, nishkama seva and faith.
May the Goddess bless our families.
🙏🏻🕉✨
Posted by Shurbhi.in at 01:45 No comments:

When I was a kid, they didn't take me to a psychologist...
My mom was able to open my chakra, Stabilize my karma, clean my aura (senses) with one single slap!
P.s. Love you Mom
Posted by Shurbhi.in at 18:33 No comments:

What is the meaning of being Krishna? 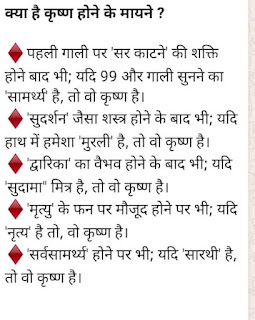