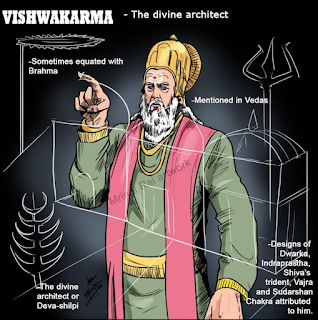 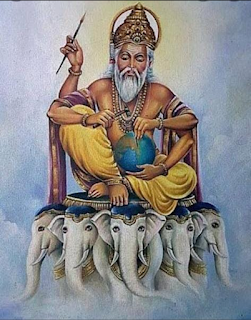 A revered figure in Indian scriptures, Vishwakarma is often referred to as Deva Shilpi or the divine architect.
He is mentioned at multiple places in Vedas where he is many times equated with supreme Brahma or Brahma himself. It sorta make sense as well, as Brahma is the one who creates, who builds.
Multiple stories from puranas and epics says the golden Lanka was designed and architected by him and so was Pandavas Indraprastha and Krishna's Dwarka. The famous weapons, Vajra of Indra, Trident of Shiva, Sudarshan Chakra are also attributed to him.
Bowing and praying to the god of design and architecture is just one example of beauty of Indian traditions where we don't miss to acknowledge everything that man can do, we give Godly status to all types of karma. Hard work, craftsmanship, designing is to be worshipped, ask any artist how much it would mean to him or her.
May lord Vishwakarma bless you with even iota of his skills not just in actual designing but also about building and designing your future.. 🙏🙏