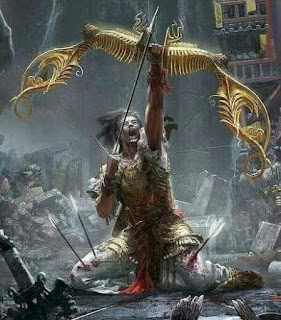 Ashwatthama got furious when his father Drona was killed in the war, as a result of deceit from Pandava camp. As a counter attack he launched "Narayana Astra", the illustrious weapon of Vishnu.
This wreaked great havoc on opponents by making countless weapon rain drop from heavens, until Krishna (god himself) disclosed the secret of surviving it: laying down weapons, do not retaliate & remain calm. As this celestial weapon targeted only armed warriors & ignored unarmed ones.
Krishna added that this super natural weapon was so powerful that if opponent bring in the idea of war to their minds, weapon was receptive to that & will destroy them.
Pandavs quickly followed the survival tactics, with their troops abandoning chariots & getting themselves unarmed.
Impact of Celestial astra gradually passed by with time!
What's next, YES Pandavs rose again & fought the battle & WON !!
Wonderful message here is that:
"Battles are not just about attack & counter attack. Sometimes battles are won just by staying put, being patient & remaining calm."